In the first match after the World Cup 2022, Manchester City had a victory against Leeds. Besides this achievement, there are some problems related to the coach and players of Manchester City. 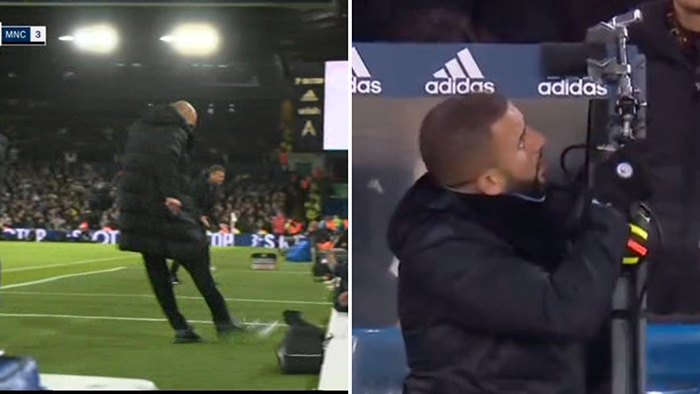 Man City's coach acted without restraint in a 3-1 win over Leeds in the 17th round of the Premier League. In the 78th minute, Erling Haaland had a good chance but could not take advantage to raise the score to 4-1. Out on the touchline, coach Pep Guardiola waited to celebrate but expressed his disappointment when he saw his student finish so gently.

On the way back to the technical area, the Spaniard took his anger out on a water bottle. However, Pep's kick sent the bottle to a member of the coaching staff on the Leeds side. According to reports, this individual is the coach of Leeds.

The captain of Man City clutched his head in panic and immediately ran to apologize. Fortunately, Pep's lack of restraint did not lead to any scuffles.

In the match against Liverpool a few days ago in the Carabao Cup, Pep also attracted attention with his odd behavior. After coming to hug Jurgen Klopp, the former Bayern Munich coach took the ball his colleague was holding, dropped it on the ground, and calmly walked into the tunnel as if nothing happened.

When Kyle Walker tore a camera from the Manchester City dugout and dropped it on the ground during his team's match against Leeds, it left viewers of Amazon Prime perplexed.

When the England right-back in the dugout rose up and appeared to fix the device in front of him, Amazon cameras caught his image.

He tugged too firmly, though, and the camera came loose from the clip holding it together and came off the dugout. The right-back then dropped the device on the floor in front of him before sitting back down, hoping no one had noticed.

Walker, regrettably, was made aware of what occurred by Andy Townsend's commentary, which advised the defender to "keep to what he knows" and ignore the camera.

Why is Kyle Walker randomly damaging camera equipment and microphones, as a Twitter user questioned? Another person wrote: "Kyle Walker smashing a camera is the most intriguing aspect of the game so far. Spectacular events at Elland Road."

"Kyle Walker is definitely eating a big fine for abusing that camera," a third person stated. And a fourth tweeted that Kyle Walker, who isn't even playing, is the most fascinating player right now.

In the match against Leeds, Man City struggled in the first half and had to wait until injury time to open the scoring due to Rodri's strike. In the second half, Erling Haaland scored 2 goals to help the defending champion widen the gap. What Leeds did was just the honorable thing to do after Pascal Struijk's header.

Written by: Leey
Leey is the reporter for Betimate. She currently has a series of articles about football. She specializes in researching football data to come up with evaluations about the tournament and predictions about the matches.
pepguardilakickbootle kylewalkerbreak manchestercitypronlem manchestercityleeds