The World Cup 2022 will feature eight teams in the quarterfinals

The knockout round ended on December 6, 2022. Below is the list of eight representatives in the quarterfinal. 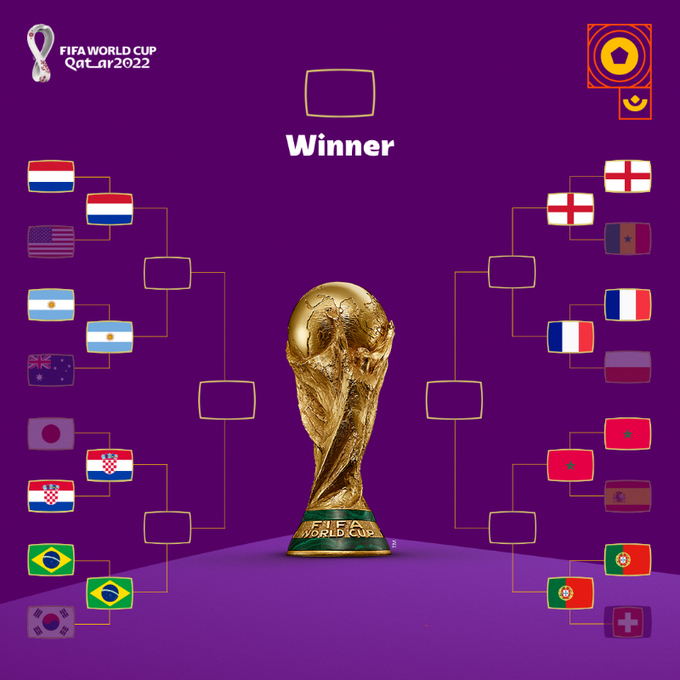 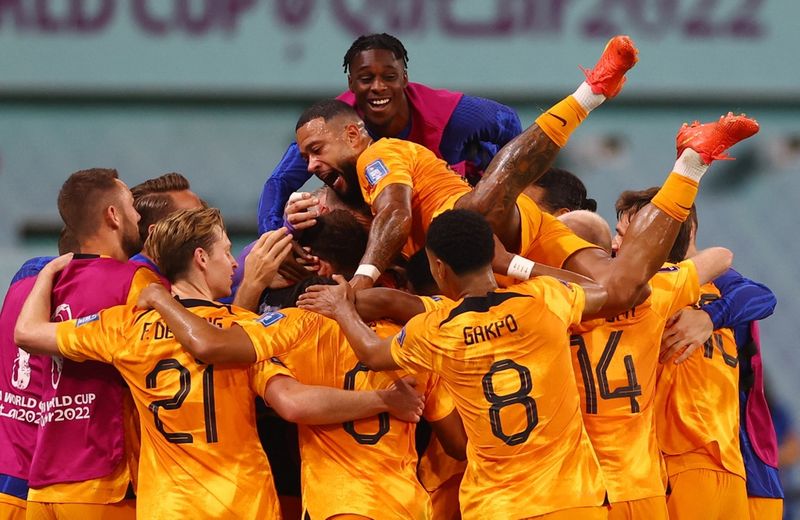 The first team to win tickets to the round of the eight strongest teams in Qatar. From the beginning of the tournament, "Orange Whirlwind" maintained an undefeated record.

Defeating Senegal (2-0) and Qatar (2-0) alternating in the middle for a draw with Ecuador (1-1), the Netherlands won tickets to the 1/8 round as the top team in Group A with 7 points after 3 rounds. match with the same goal difference (5-1).

In the 1/8 round, the Netherlands continued to assert its strength and ambition with a jubilant 3-1 victory over the US.

Cody Gakpo is the most visible player. He had 3 goals in different matches. 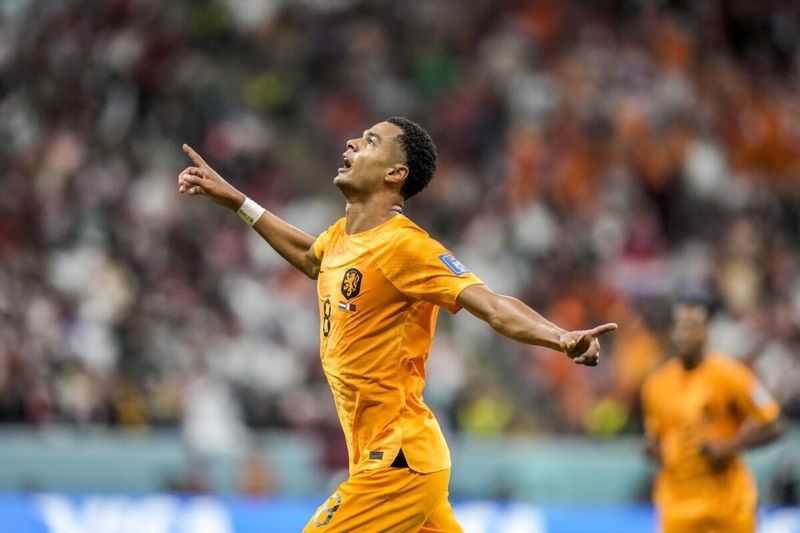 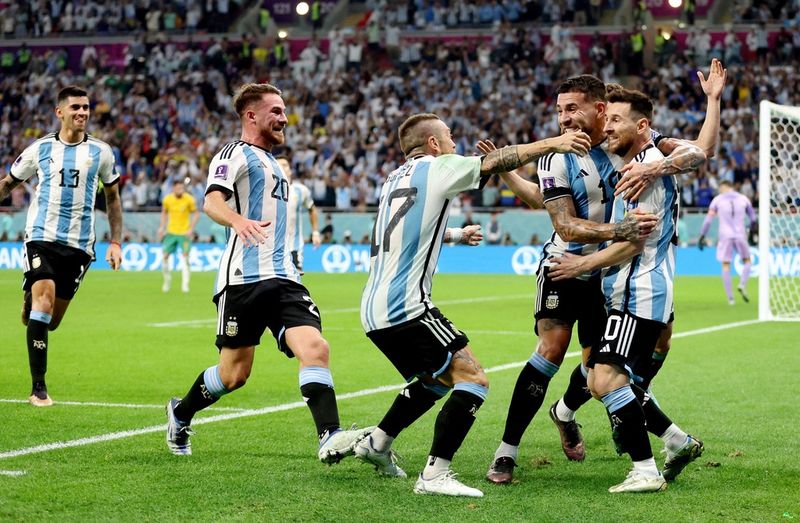 In the opening match of the group stage of the World Cup 2022, the Argentine players caused great disappointment by losing to their inferior opponent, Saudi Arabia, with a score of 2-1. However, in the following two matches, Lionel Messi and his teammates came back strongly with 2-0 victories over Mexico and Poland to earn tickets to the 1/8 round with first place in Group C.

Although they faced a difficult matchup against a weak opponent in the round of 16 in Australia, the class and difference of superstar Messi helped La Albiceleste win 2-1 and advance to the quarterfinals.Their opponent in this round is the Netherlands.

The brightest hope for Argentina is none other than Messi. He contributed not only three goals but also one assist. 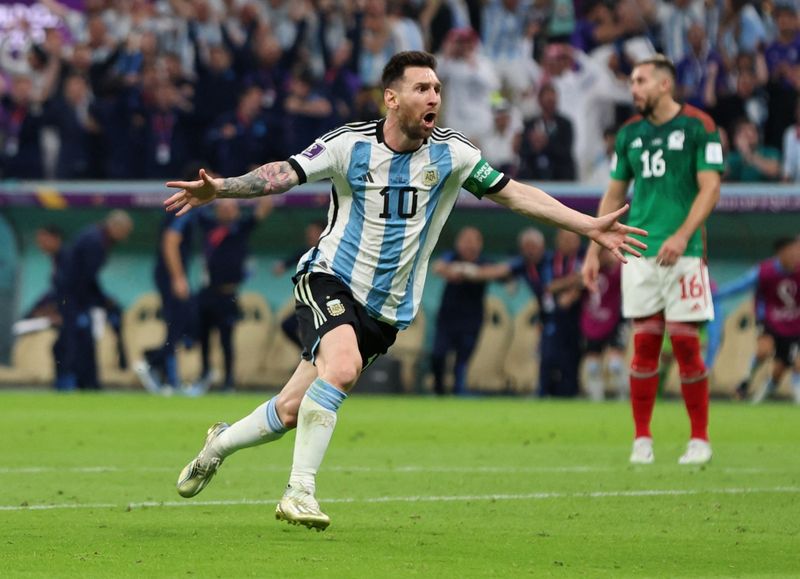 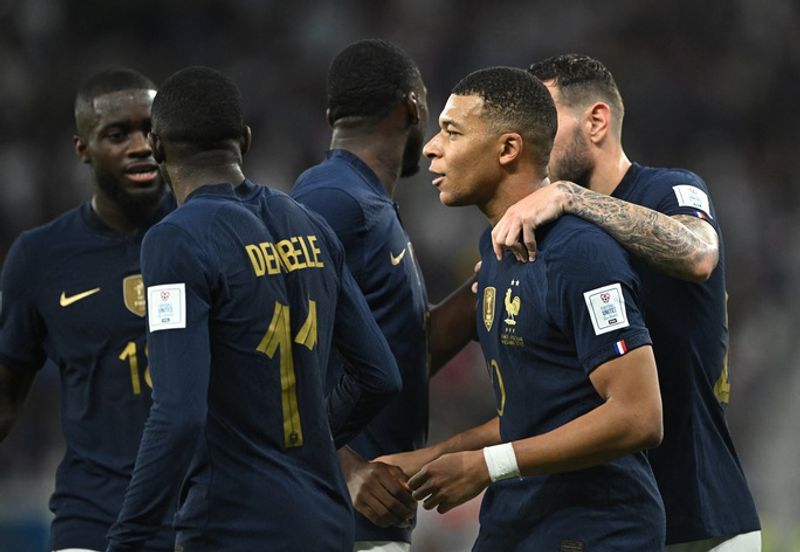 The defending champion France has affirmed its strength and ambition to defend its throne with two consecutive victories over Australia (4-1) and Denmark (2-1). They will soon be in the 1/8 round. In the final match of the group stage, France used its reserve squad and lost 0-1 to Tunisia. However, this result did not affect their first place.

In the match in the 1/8 round, France continued to show its level with a jubilant 3-1 victory over Poland.

Kylian Mbappe is becoming the hero of France in the 2022 World Cup campaign, when the 23-year-old player rises to the top of the list of top scorers with 5 goals and 2 assists.

Apart from Mbappe, other players such as Oliver Giroud shone with three goals. 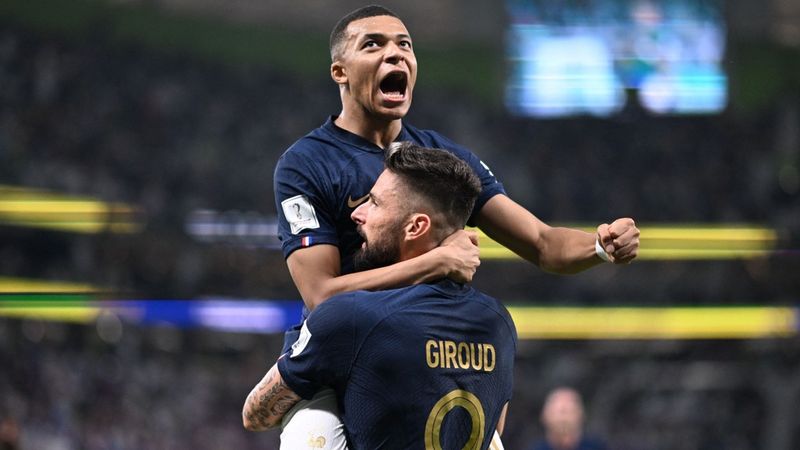 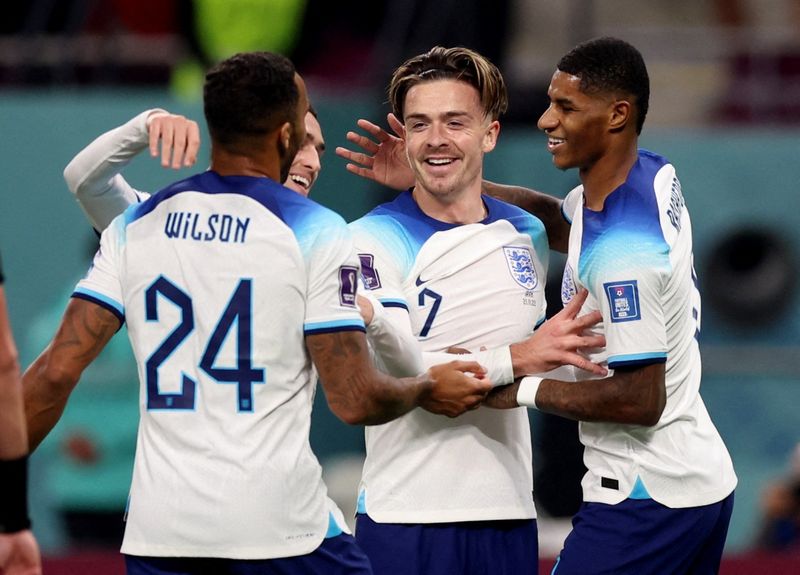 Forget the disappointment of the UEFA Nations League, England is playing explosively at the 2022 World Cup, where it has the strongest attack in the tournament with 12 goals after four group stage matches.The Three Lions kicked off their group stage campaign with a 6-2 win over Iran before a goalless draw with the US and a 3-0 win over Wales to secure the top spot.

Coach Gareth Southgate's army continued to show their level in the knockout round, destroying Senegal 3-0 and swaggering into the quarterfinals against defending champion France.

Unlike other players, England did not rely on a single player. Their members had different goals for themselves. While Saka, Jude Bellingham, Raheem Sterling, Phil Foden, and Jack Gearlish had scored, the captain, Harry Kane, contributed three assists to his teammates. The Golden Boot 2018 winner also scored in the knockout round against the United States. 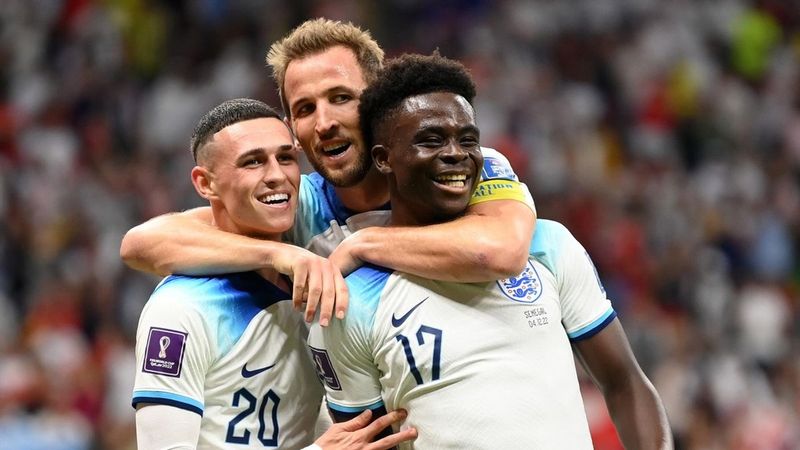 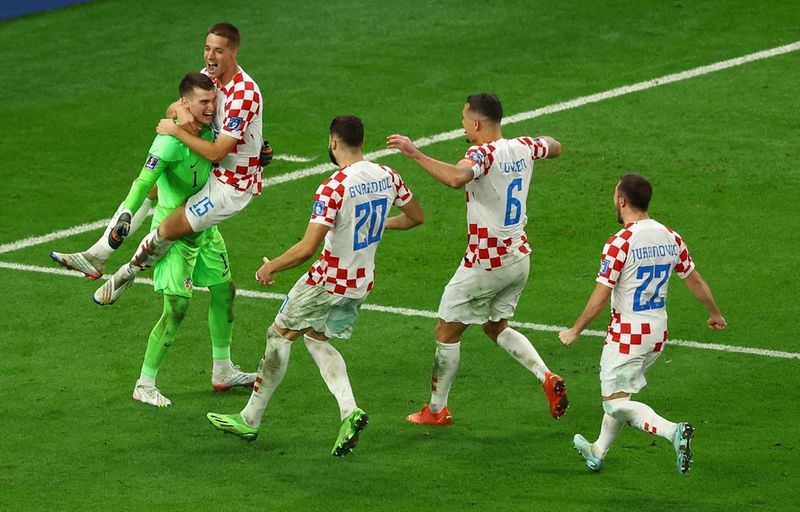 Four years ago, Croatia reached the World Cup final in Russia after winning all three matches in the group stage, including a victory over Argentina. In Qatar this year, coach Zlatko Dali's army, although unable to win all the points, still had an unbeaten record with draws with Morocco (0-0), Belgium (0-0), and defeating Canada (3-1).

By the end of the 1/8 round, Croatia had spent 120 minutes full of tension and drama with Japan, which ended inconclusively (1-1). This result forced the two teams to enter the penalty shootout, and goalkeeper Dominik Livakovi became a hero with three saves to bring the plaid shirt team into the quarterfinals.

As a team that values teamwork, it is difficult to determine which player has been the best player in the Croatian squad since the beginning of the World Cup. However, Ivan Perisic is being considered the most prominent player, given that he has two assists in the group stage and last night scored the equalizer against Japan. In addition to the statistics, the role and contribution of the players on the Tottenham payroll in the game are significant. 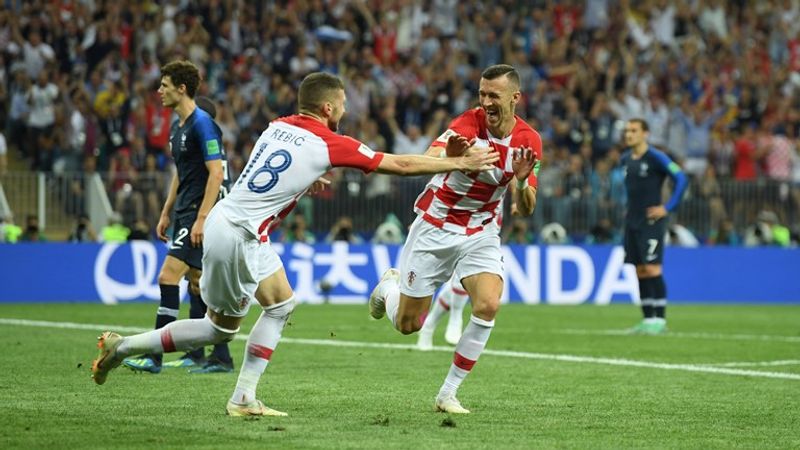 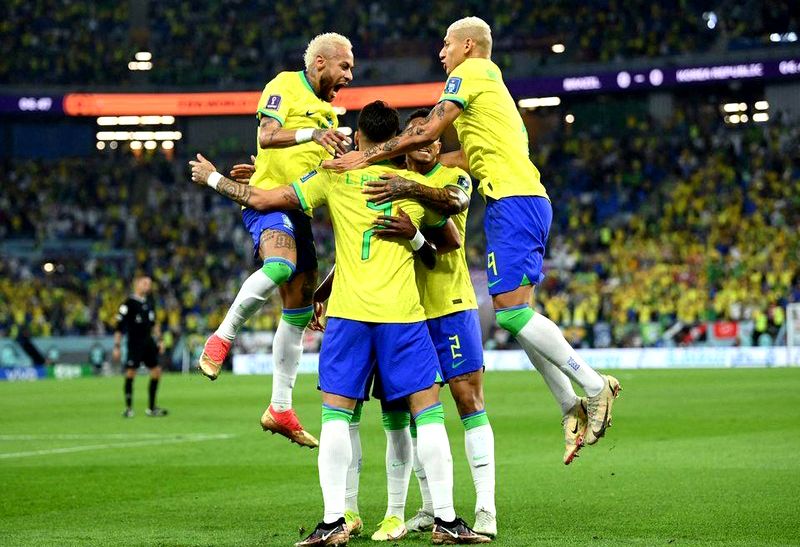 Brazil, one of the strongest contenders for the title, quickly demonstrated its determination to win the trophy for the sixth time with two easy victories over Serbia (2-0) and Switzerland (1-0). I'm in round 1/8. The recent loss to Cameroon had little impact on the Selecao's ranking.

Brazil, with the return of star Neymar, showed their class in the 1/8 round match, crushing the Asian representative with four goals before the break and winning 4-1.

Neymar may have played only 2 matches for Brazil since the beginning of the tournament, but there is no denying the role of "number 10." With a 29-year-old player on the field, Selecao's strength has increased a lot, and the attacking style is more liberal. Richarlison also showed good performance when having 3 goals for Brazil. 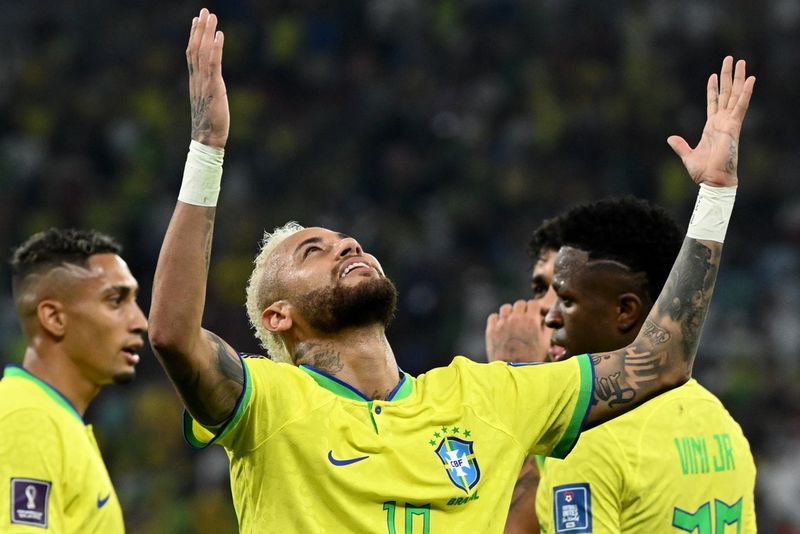 The World Cup of 2022 is only the sixth time that Morocco has appeared in the biggest football tournament on the planet. In the 2018 World Cup, they had to leave the tournament when they were at the bottom of their group. However, four years later in Qatar, a completely different picture of Morocco emerged when they excellently overcame Croatia and Belgium, two teams in the fourth group of the 2018 World Cup, to lead the table and win tickets to the knockout round.

In the match in the 1/8 round, Morocco faced Spain, the World Cup 2010 champions and one of the brightest candidates for World Cup 2022 champions. Morocco successfully kept their lead in both official and extra time before winning 3-0 on penalties.

Hakim Ziyech withdrew his decision to quit the national team after being persuaded by new coach Walid Regragui, and this is considered a great success for Moroccan football when the player on the Chelsea staff has confirmed his first role. when you contribute one goal and one assist. 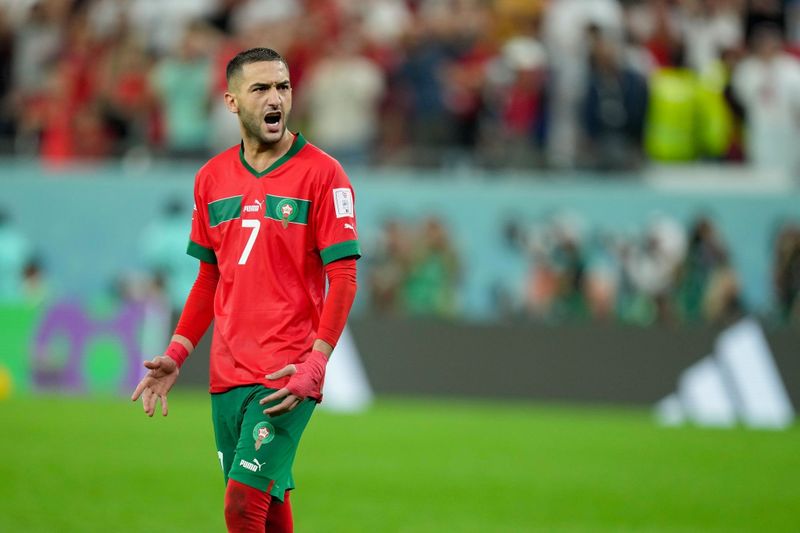 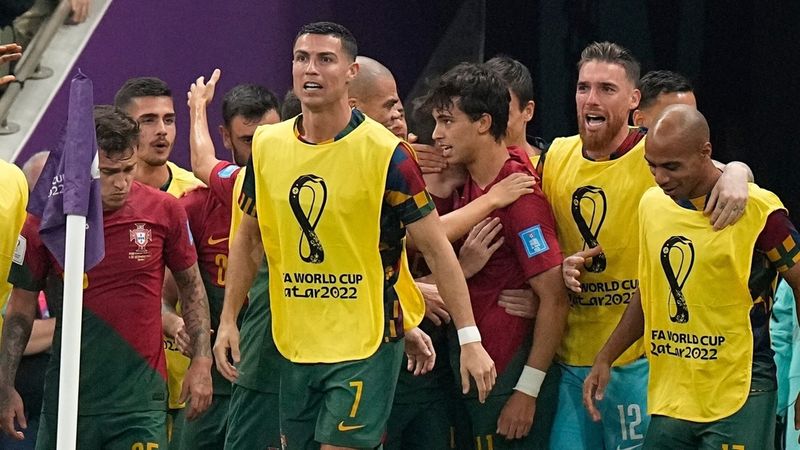 Portugal is considered one of the candidates for the championship. They soon got tickets to the 1/8 round after the first two matches were won. Despite losing to Korea in the last match, Portugal still secured the number one position in the rankings.

In the round of 16, Portugal made everyone admire their strength with a crushing 6-1 victory against Switzerland. In the first match since the start of the tournament, coach Fernando Santos boldly eliminated superstar Cristiano Ronaldo and relied on Goncalo Ramos to full effect, as the 21-year-old shone with a hat-trick to help Portugal reach the quarter-finals.

It is difficult to judge which player has made the biggest impact on Portugal's play at this year's tournament. However, Bruno Fernandes and Joao Felix are being considered the most prominent names contributing to the team's success.