Bundesliga: The second highest competition of football in Germany.

The league was created to be the second level of football in West Germany before the Unification in May 1973. Back then it consists of 20 teams with two divisions and eventually reduced into 1 division in 1981. The clubs from East Germany joined in 1991-1992 onwards.

Do not forget to follow all Germany Bundesliga II Predictions right here on Betimate! 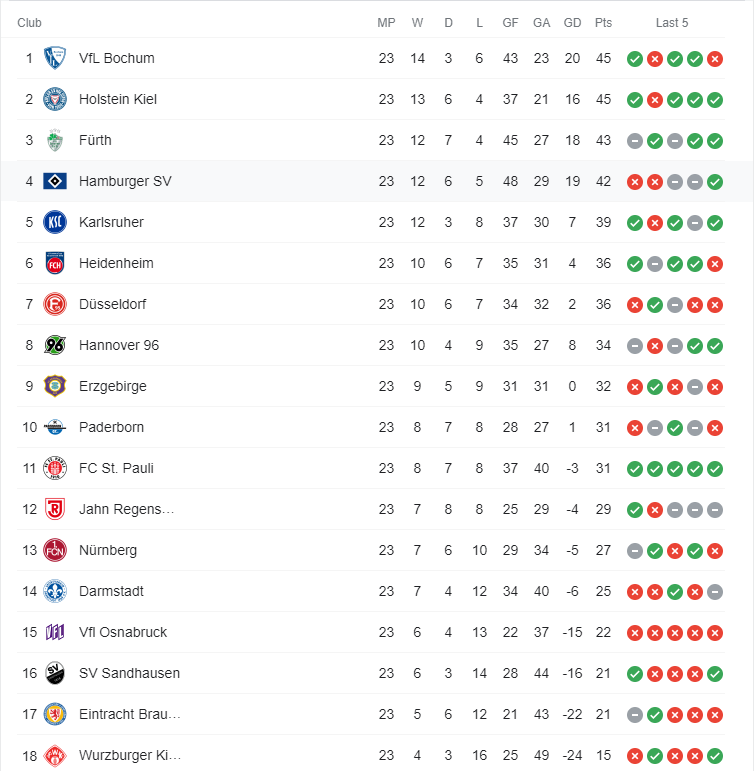 The standings of the 2.Bundesliga

The decision to create the 2. Liga was made in 1973 and finally got their first match played in August of the following year. Before the finalization, however, the league replaced an entirety of 5 divisions (Regionallliga), including Regionallliga Süd. Regionallliga West, Regionallliga Nord , Regionallliga Südwest and the Regionallliga Berlin. Which each Regionallliga sent their according teams, respectively 13,12,12,7,1. Thus making forcing the league to be divided into a Northern and Southern league, each contains 20 teams. The two divisions were finally merged into 1 division in 1981 and eventually when the fall of the Berlin wall happened, East Germany sent their participating teams in the 1991/1992 season, thus leading to the expansion of the league once again.

The first player ever to score a goal in the 2. Liga is Nikolaus Semlitsch who, at the time was playing for 1. FC Saarbrücken.

The first champion of the Northern League was Hannover 96 and it was Karlsruher SC for the Southern Part of the league.

The league was expanded to make room for the six new East German clubs, which were spread unevenly based on the geographic attribution of the clubs. But at the end of the league, they reverted the league back to its old format with 24 teams. The reigning champions of this season were Bayer 05 Uerdingen and 1.FC Saarbrucken

The 2. Bundesliga teams play in a round-robin system. Where they play each other twice (once at their home and once at their respective opponents). Every team gets three points for winning, one for both teams per draw, and naturally none for a loss. From 1992-93 to 2008-09 season, three teams with the most scores got to be promoted to the Bundesliga without the play-off session. The 09-10 season marked the 1st play-off match between the 3rd team of the 2. Liga and the 16th team of the Bundesliga.