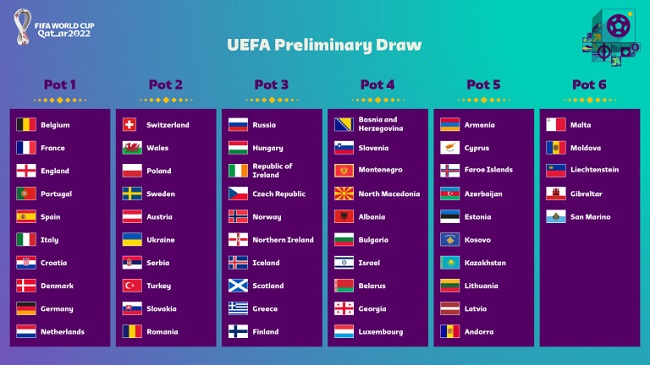 As a king of football, the UEFA is the top association in the world. Therefore, no wonder why the World Cup Qualification UEFA Predictions grab the attention of plenty of football fanatics all over the world. We have it all here on our website, just refer to it and make an accurate bet on every single match.

Since RUSADA was deemed non-compliant for turning over compromised lab results to authorities on December 9, 2019, the World Anti-Doping Agency issued Russia a four-year suspension from all international sporting events. On the other hand, the Russian national team could still compete in qualifying because the suspension only extends to the final tournament that determines the world champions. The WADA decision permitted athletes who had not been complicit in doping or the cover-up to participate, but it prohibited the use of the Russian flag and anthem at major international sporting events. WADA's ruling was upheld and limited to a two-year suspension, after an appeal to the Court of Arbitration for Sport.

The CAS decision also permitted the use of the term "Russia" on jerseys if the words "Neutral Athlete" or "Neutral Team" are prominently depicted.  When Russia qualified for the World Cup, its teams would be unable to use their country's name alone, flag, or anthem because of the country's two-year exclusion from both world competitions and Olympic Games.

The eventual decision was made by the UEFA Executive Committee and later confirmed in Nyon, Switzerland on December 04, 2019. The structure will stay the usual ‘Group/play-off stage” in which:

The draw, however, was conducted as a simulated occurrence due to the COVID-19 pandemic, with no delegates from member associations participating. It was initially scheduled for November 29, 2020. The UEFA Executive Committee approved the qualifying group stage draw regulations on June 18, 2020. The draw was hosted by FIFA's acting head of tournaments, Jaime Yarza, and introduced by Spanish journalist Cristina Gullón. Following the end of the league process of the 2020–21 UEFA Nations League, the 55 teams were seeded into six pots based on the FIFA World Rankings of November 2020.

Groups as of now

Visit our website for more information about the 2022 European World Cup qualifiers Predictions and results!